Part of the ongoing editing and sorting of archives is throwing up a few odds and ends that I had forgotten about. This picture was a very underexposed 6x4.5 transparency. 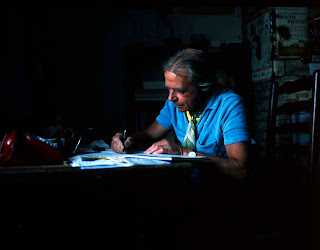 Too dark to do anything worthwhile with on film but when scanned and tweaked with in Photoshop it produced an acceptable result.
The subject was Lawrence Shove, a very old family friend, and was taken in 1980 in his office at Minack House, Porthcurno. While he was manager at the Minack Theatre.
In his life he had been many things.  Farming and working with heavy horses, his love of nature took him into the world of birdsong recording. These recordings are now in the National Sound Archive,
"the Shove collection of British wildlife on 243 reels of tape. The late Lawrence Shove was one of the first contributors to the wildlife collections in 1969 (wildlife recording reference number 00001 is his taping of a Bittern Botaurus stellaris at Hickling Broad, Norfolk). NSA recently acquired his complete collection."
I can remember him stopping several times, at my Grandparents house, with his Austin A40 Farina full of tape machines, parabolic reflectors, stands and all his other equipment. The main reason was his search for the Capercaillie. From memory it took him several visits to the Highlands before he was successful in getting a recording of the mating call.

In the early 1970's he became manager of the Minack Theatre in Cornwall, when the work of running the theatre became too much for Rowena Cade, the theatres creator, to manage on her own. It was here that I got to know him the most as I visited over a few summers, helping out in the theatre, during my holidays.

His funeral was the most memorable that I have attended. He is buried in the village on the edge of Dartmoor where he lived most of his life. The funeral was on one of those first sunny days of early spring, just when the flowers were starting to bloom. His coffin was decorated with a posy of spring flowers picked from the hedgerows by children from the village school. The church was full with people standing at the back and spilling out into the churchyard of the small village church.

I am glad that I did not discard this bit of film 30 years ago. I also wonder what other images I will find and be able to resurrect.
at September 24, 2011