Well it looks as though I am going to have a good and prosperous year of the Dragon.

I had a trip up to London to watch the Chinese new year celebrations in Chinatown. After watching the parade. I wandered along Gerrard Street and than up on to Shaftsbury Avenue. The roads were all closed and I was standing around watching the goings on on a small stage area, when the Chinese god of money came out of a bank and gave me a red envelope with some money in it. Well that was what I told the policeman:)

OK in truth, it was a Chinese man dressed as the god of money and the envelope had 20p in it. But as that was the first time I have ever received money from a bank without fighting for it, I am seeing it as a good omen, even a very good omen! 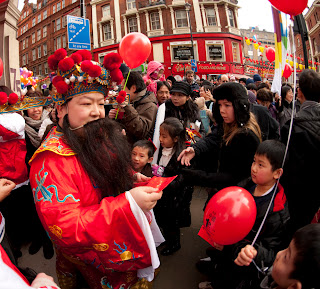 I will send you a picture:) I will be keeping the money and envelope as a unique item.