We had a strong recommendation to do a round the island boat trip on one of the boats that offer the trip. We were recommended to use the Poseidon and were pleased to see that the rep from the holiday company had arranged for us to easily book a trip on the Poseidon.
The boat trip departed from Yialos at 10.30am. We left our apartment in Horio with plenty of time and had a nice walk down the Kali Strata before the heat of the day built up. We found the boat and checked on how busy they expected to be for the days trip, before we wandered of to get a coffee in one of the nearby cafes. 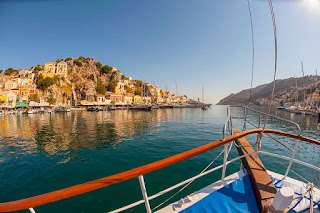 We got back to the boat about 15min before departure to ensure a good seat. We ended up sitting on the front of the cabin under the sunshade. It turned out to be the perfect place out of the sun but with maximum cooling from the breeze, also as we were sitting with two couples we had already met, we were able to share the space without feeling we were encroaching on other peoples space. 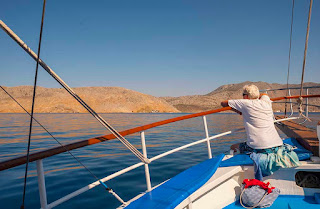 The trip we were on was a five stopper. First a visit to the church at St Isidoros. For a swim and a walk around the church. 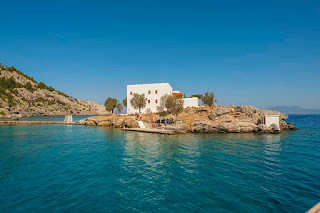 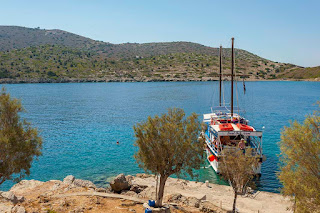 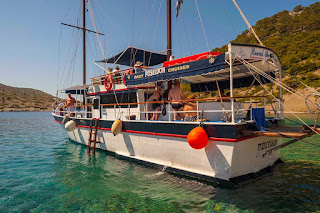 Next a stop at Seal cave. The seal must have heard us coming as it was not at home but we had a nice swim off the boat. 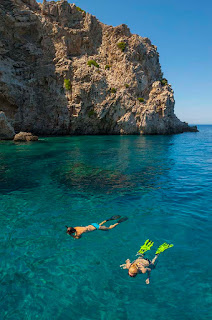 Then back on the boat and on to Diavates Island for another swim off the boat. 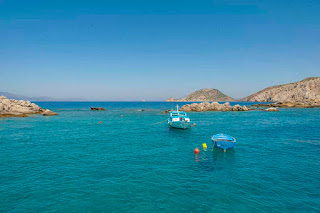 Each of these stops gave us about half an hour swimming time. which was enough.
The next stop was at Sesklia Island for a lunch stop and a much longer swim. 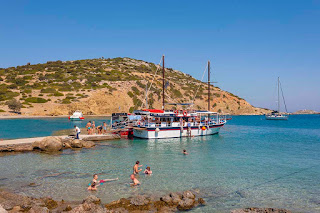 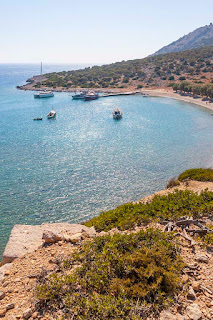 We could smell lunch being prepared onboard the boat as the smell of cooking and garlic was wafting up from underneath us as we sat on the cabin. Lunch was a mix of salads pasta and barbecue chicken, which was cooked by the crew on a barbecue which was lit as soon as we moored up at the pier. After eating all we could and having had another swim it was back on the boat.
We were then on the run back up the east coast of the island. The only stop here is at St Georges bay this bay is only accessed by boat as it surrounded by steep cliffs which shade the beach in the afternoon. 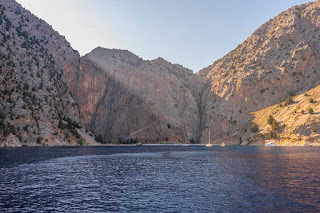 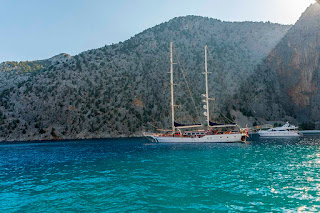 We swam of the boat and then had coffee and watermelon.