In about 1990 I got a call from a PR man I had known for some time with  the offer of a job that I may be interested in.

The brief was to photograph some vehicles at the Eurotunnel visitors centre at Folkestone. For those who are too young to remember, this was a tourist attraction set up across the M20 from where the tunnel terminal is now. Inside was information about what was going to happen with the new tunnel.

Outside was a paved area where we had received permission to park vehicles for the shoot.

On the day of the shoot the car and the truck arrived from the UK but the coach was brought over from France as it was not available in the UK.

The image was set up with several different coinfgureations and one was chosen for the print run. 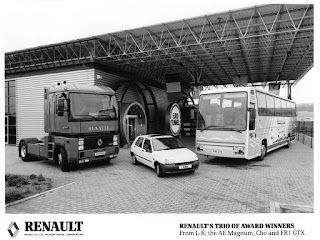 The print run was the fun bit as Renault wanted the information printed on the front of the image and they wanted too have a run of 1600 prints.

If it was now then that would be no problem as the text and logo could be added digitally, the file sent of and in a day or two prints would be delivered.

in 1990 this was very different and I needed to build a temporary setup to be able to hand print all the prints as easily as possible.

Getting the copy approved and type set was not a problem. I then had it sized so that it was the right size for the print. The typeset film was cut to give a straight edge along the top. this was then stuck into the printing frame.

I then needed to set up a way of exposing the text. I built a triangular box about 30cm high and 3cm wide with a light bulb in the point and the open bottom of the triangular box sitting on the typeset film. The light bulb was wired to a variable transformer and connected too the timer that was also connected to the enlarger.  This triangular box was attached to the masking frame and stuck down on the typeset film so all the light leaks were sealed and that the light bulb was only exposing through the film and no light was fogging the rest of the image.

It was then simply a matter of putting paper in the masking frame pushing the button on the timer. The timer switch on the enlarger and the bulb for the text for the same time, at the end of the exposure the paper was removed and put in the processor and 90 seconds later a correctly exposed print cam out.