While I was looking at my blog post list I found that this will be my 500th post to the www.thelightroom.blogspot.co.uk  I have been posting since July 2009.
Compare this the majority of blogs that only have a couple of posts before they get abandoned, I feel reasonably proud.
For a bit of fun for this 500th post I thought I would find the very first pictures that I took along with the original camera used to take them.

Being the collector that I am, I still have, and can find both!

The camera used was the family camera. A Kodak Brownie Cresta II. The camera was manufactured by Kodak UK between 1956 and 1959. It uses 120 film and shot 12  2 1/4" square images per roll. Looking at these dates and the family pictures I guess that the camera was bought when I was born. All the pictures taken prior to my birth are on a rectangular format and when I arrive they switch to a square format. 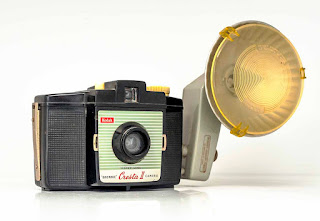 I am not sure what date that I took my first images as they are in a folder with some other images which I can date to 1967. The negatives are also in the folder but for some strange reason there are two sets of negatives with the same number. As the 1967 images are better quality I know that these first two images were taken earlier.
Also written on the print folder is the processing and printing costs. It looks as though the cost for processing and printing 12 B&W images in 1967 was 7/9d which is about 40p in todays money. Corrected for inflation that is £6.66.

I can remember taking my first picture. 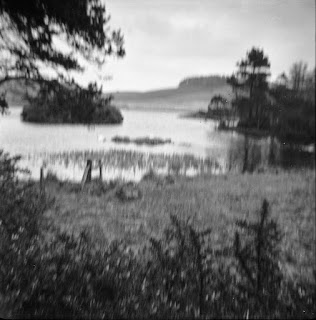 We were on a family walk around the Knapps which is a small man made Loch near where we lived. I can't remember if I asked to be allowed to take a picture or if I was just given the camera but I did one negative that day.
Some time later we were on a day trip to Largs and took the backroad to Fairlie. As you drop off the moors there was a stream and a waterfall that Dad liked to stop at. 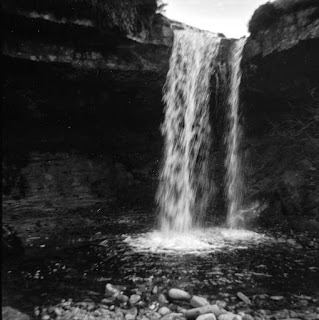 Neither image is very sharp but I managed to get a reasonable composition, got what I wanted in the picture and managed to keep my finger out of the way of the lens.

So the last three points are all you need for success in photography!