Cornwall and the Hunt for the Milky Way

After our trip to Leicester we had the offer of some time with friends down in Cornwall.

It has been many years since we managed to spent some time in Cornwall, so we jumped at the offer.

Strangely enough my first thoughts were not about great beaches, cream teas or sun, but, yeah! dark skies.

Ever since I tried some star photographs when I was up in Scotland in the early part of the year. I have been wishing for dark skies, and by dark skies I mean really dark skies. The darkness that you only get away from large towns and villages.

I was hopeful, as we were staying only about 3 miles from Lands End and about 6 miles from Penzance which was the nearest town of any size but the weather forecast was not looking hopeful for clear skies in the evenings, except for the first night.

The drive down was slightly damp in places but we made good time. The sunset was spectacular 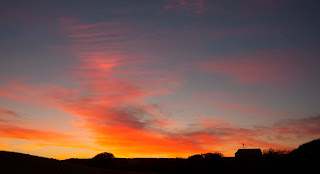 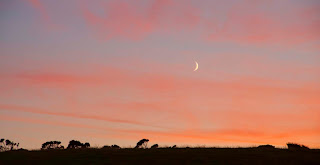 I then had to wait and hope that the clouds stayed away. By 10 o'clock it was dark enough to start shooting. My original idea, was to plan some possible shots during the day for a return at night. As I had not had time to look for locations I decided to just walk down the lane from the cottage, wait for all the security lights to go out and see what happens. 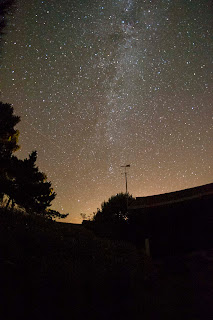 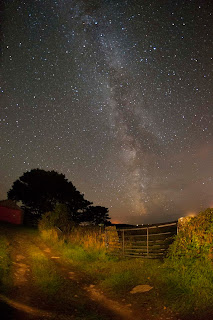 The results were wonderful. The Milky Way was barely visible to the naked eye but looked spectacular in the pictures. A slight splash of torch light illuminated the foreground to give some interest on some shots.

What was surprising though was how much Light pollution there was in the night sky, even at the tip of Cornwall. The orange glow of the lights from Penzance and nearby farms was enough to overwhelm the darkness on shots taken in most directions and although I was pleased with the images. It looks as though I am going to have to look elsewhere for really dark skies.
at September 17, 2013